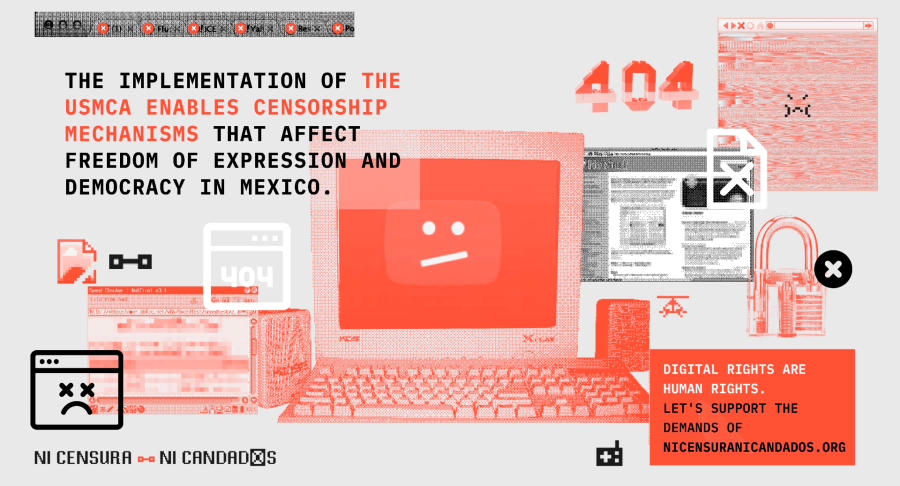 We, the undersigned public interest organizations and individuals, in reaction to the approval by Mexican Congress of sweeping changes to the federal copyright regime in implementation of the Agreement between United States-Canada-Mexico Free Trade Agreement (USMCA), declare:

We oppose the bills that implemented USMCA intellectual property rules in Mexico without adequate debate, justification, and without even using the flexibility within the USMCA to lessen their harm to fundamental human rights and to the Mexican economy. These bills reinforce the draconian copyright system in place in Mexico, and worsen them by importing some of the most troublesome aspects of US copyright law. We, the undersigned, have been part of global discourse documenting the many ways in which copyright maximalism enters trade agreements, circumventing democratic processes and evidence-based debates. We see this process at work again in Mexico and we oppose it.

While these revisions are allowed to stay in force, Mexico is struggling with the “notice and takedown” system — a notoriously easy-to-abuse system of censorship based on unreviewed copyright infringement allegations. This system apes the model in force in the United States since the Digital Millennium Copyright Act of 1998 (DMCA). While this system has coincided with the expansive growth of US-based internet platforms delivering user-generated content, it has allowed for a significant amount of restrictions of legitimate speech, including political criticism. It has also opened the door for automated speech restrictions. It is a system of censorship without judicial review of allegations of wrongdoing, and without any meaningful consideration of the free-expression-preserving limitations and exceptions to copyright. It allows for “copyfraud” takedowns, in which material in the public domain, or material that is freely licensed, or material that is not owned by the complainant is removed without due process. The revisions to Mexican copyright law fail to take into account the system’s negative impacts on freedom of expression, as well as standards on content restriction based on international human rights law, such as the Manila Principles on Intermediary Liability.

The revisions also implement legal restrictions on the removal of “technological protection measures” (TPMs) in Mexico, without proper safeguards for cases where circumventing these measures has legitimate purposes. Federal criminal law now establishes steep fines and the risk of prison in case of infringement. Anti-circumvention regimes have been a disaster for fundamental rights, including the right to freedom of expression, the right to access to knowledge, properly secure in all cases the right of people with disabilities to adapt their technologies to suit their needs, the right to independent repair. These rules can result in prosecution in violation of Mexico’s obligations under the Marrakesh Treaty. Moreover, anti-circumvention rules are catastrophic to competition, enabling dominant firms to use TPMs to prohibit normal competitive activities, such as the manufacture of third-party spares and consumables, and the creation of interoperable products.

TPMs have proliferated like mushrooms, springing up in every sector, for use in purely anticompetitive ends. Recent deployments include TPMs for ventilators, tractors, diabetic glucose monitors and automobiles, all to prevent independent repair, and to allow dominant firms to harvest data and constrain the conduct of their critics, customers and competitors. The USA had the excuse of making its TPM law in 1998, before anyone had irrefutable evidence of the negative consequences of such a rule and before devices governed by copyrightable software had become ubiquitous. Twenty-two years later, the harms have been documented in numerous government rulemakings and court cases within the United States, establishing harm to creators, innovators, researchers, and the general public. Mexico has no excuse for adopting this backwards copyright regime that has proven harmful to law-abiding persons, which hinders rather than promoting the broad participation in creative activities that copyright is intended to support.

The rushed approval of these revisions is an abdication of the duty of the federal Congress to democratically, openly, and transparently debate the rules under which the Mexican citizens will be legally obliged to live their lives in the digital era. This abdication represents a missed opportunity to discuss the real needs for freedom of expression for Mexican creators, innovators, researchers, and the general public. Tragically, the Mexican Congress has failed to explore the flexibilities within the text of USMCA that would allow Congress to more appropriately respond to the needs of the Mexican population and the values embodied by the Mexican Constitution. An example of this is that the limited existent exceptions and limitations to copyright in Mexican law were not reviewed or expanded to adjust to this new regime and this deepens Mexico’s disadvantage in front of its partners that have far more robust exceptions through fair use and fair dealing.

USMCA is a trilateral agreement, and the other party to it, Canada, has preserved much more space for free expression, innovation and competition in its own implementations of its treaty obligations. Where the US and Mexico have “notice and takedown” for copyright infringement accusations, Canada has “notice and notice” – a much more measured system where due process and free expression weigh more heavily than the desire of putative rightsholders to remove material from the public Internet.

Likewise, Canada’s anti-circumvention rules are far more flexible than either the USA’s or Mexico’s, and gained still more flexibility as the power of TPMs to distort industrial policy and affect fundamental rights were made obvious. In 2019, Canada’s Standing Committee on Industry, Science and Technology made 36 recommendations for reforms to Canada’s copyright rules, including several that intersect with TPMs protections: notably, the Committee recommended a blanket exemption for TPMs circumvention for non-infringing purposes, including making uses permitted under limitations and exceptions to copyright; as well as making repairs.

Even as Canada was relaxing its own TPMs regime, the USA has held six “triennial reviews” in which the US Copyright Office hears petitions for exemptions to USA’s anti-circumvention rules to allow users to bypass TPMs for lawful purposes (a seventh proceeding is scheduled for 2021). These reviews have created a long list of exemptions to anti-circumvention that Americans can enjoy.

In other words, two of the three parties to USMCA have far less restrictive versions of the laws just adopted by Mexico’s Congress: US and Canadian firms enjoy a substantial competitive advantage over their Mexican counterparts. US and Canadian firms can make complementary products and services to those offered by Mexican firms, including repair, improvements, consumables and parts, and collect the revenues these products and services generate. However, Mexico’s lawmakers have tied the hands of its own industries, prohibiting them from doing the same to products from Canada and the USA, on pain of criminal sanction.

Additionally, USMCA is only the latest example in a long line of “free trade” agreements (FTA’s) promoted by the US that seek to export an increasingly restrictive copyright system to developing countries without proper consideration for evidence, human rights, or democracy. Many of the implementations of those treaties by countries in Latin America have taken advantage of the flexibility of language provided in them in order to make them more consistent with their own legal regimes. This is the case for Chile that implemented in 2010 an expedited judicial notice and takedown regime, in response to its FTA with the US.  The system is broadly similar to the DMCA, with the critical difference that intermediaries are not required to take material down in order to benefit from a liability safe harbor, until there is a court order for removal of the content, under a special expedited legal process. This system discourages automated or otherwise abusive notices that are more likely to hinder speech.

Finally, we call attention to the fact that this is not “free trade” if Mexico surrenders its commercial advantages to two larger, wealthier nations who can extract rents from its people and limit unfairly their exercise of right in an even more sever way than is the case of the users in the other countries part of the agreement.

The support from incumbent US internet and technology companies does not qualify as a credible endorsement for the proposal as a means of realizing a robust, secure, innovative and free internet. Rather, it represents an expression of their own interest in expanding their commercial interests, irrespective of their impact on Mexicans and the global community of technologists, entrepreneurs and innovators. The Mexican case is a dangerous example for the rest of the world negotiating or implementing free trade agreements with the US.

We, the undersigned public interest organizations and individuals stand in solidarity with the people and organizations behind the “Ni Censura Ni Candados” campaign, and their efforts to stop this harmful reform. We call upon Mexican Congress to consider reforms in intellectual property law that favor the interests of users and innovators, and to open legislative discussion to all the stakeholders, so they can be part of a truly democratic process aimed to benefit society as a whole.

We call upon the Mexican public institutions to reject the reforms passed by Congress to reform federal Copyright Law and the Federal Penal Code, and to denounce its lack of coherence with national, regional and global human rights standards. We call upon the National Human Rights Commission to challenge the constitutionality of these laws before the Supreme Court and we call on its judges to repeal them.